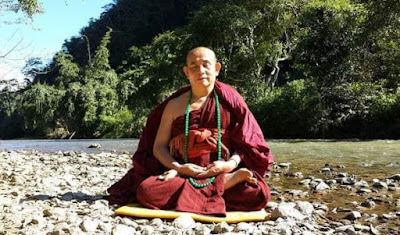 Kruba Boonchum is a forest meditation monk. He became well-known at the age of 13 to devotees in Laos, Sipsongbanna of Yunnan Province in China, Shan State of the Union of Myanmar and Thailand for his solitary and serious meditation practice.

Kruba Boonchum was born in BE 2507 in Pa Maisak (Timberfield) Village, in Chiang Saen District in Northern Thailand. This area is also known all over the world as the symbolic landmark of the Golden Triangle. Kruba Boonchum was given the name “Boonchum” due to his mother having a vivid dream of a beautiful golden pagoda around at the time of his conception. Both of Kruba Boonchum’s grandparents were Tai/ Shan speaking people, originally from Mong Yong near Kengtung (Chiangtung) in the eastern part of Shan State, the Union of Burma and migrated to Chiang Saen where Nang Saeng La, the mother of Boonchum was born.

He was the eldest of four siblings and his father, Loong Kham La passed away when he was just six months old. Later on, his mother remarried and had three more children. Following the traditional custom of South-East Asia where boys are initiated as novice (samanera) at a young age. Kruba Boonchum was initiated at the age of 11 and after the completion of his primary education, with thirty-two other boys in BE 2518. After a year or two, all of the other boys returned to lay life, except Kruba Boonchum. As he has taken interest in meditation. After studying Buddhist scriptures for an year and having completed nak-dhamma tri, the first foundation level of formal Dhamma examinations, he decided that the formal study as it was taught to him emphasized too much theoretical understanding and passing examinations and that he wanted to learn the Buddha’s teaching in a more practical way. So, whenever given the opportunity he would approach well known meditation teachers in Northern Thailand and learn from them. Sometimes he would go and meditate in the cemetery or on corpses. Unusually quiet and meditative for his age, he was often teased by other novices. But that did not deter him from going into the meditation practice deeper and more serious than any of the other young novice monks of his age.

His serious meditation practice attracted devotees who started making offerings, including money to him. However he would donate all the offerings to others. Whenever devotees came, he would also chant to invoke blessings of the Buddha on them and explain to them the Buddha’s dhamma in simple terms. He would usually talked about the admiration he had on the Buddha’s life leading to meditation on the Buddha (Buddhanussati), the Buddha’s teaching on the five precepts; the loathsome nature of the body (asubha-bhavana) and the inevitability of death (maranassati) and meditation on compassion (metta). His chanting took approximately two hours and he did so with deep concentration and a beautiful voice. His chants were all in Pali and what have been preserved in the forest meditation tradition in Lanna, Northern Thailand and in the eastern Shan State of Burma. His style and his strong faith in chanting awakened the seed of devotion in many who heard it.

At the age of 13 and just over two years into his novice-hood, he was well known enough to have attracted generous donors who helped him renovate a chaitiya (pagoda) at the village called Wieng Keau, not far from his birthplace. Since then, he moved from place to place for the observation of rains-retreat (vassana) and in search of solitude and meditation teachers. At the age of 16, he went to meditate in the Pa-sah forest near Mong Phong Village, Tachilek Township in Shan State, Union of Burma, which is, in fact, just the other side of Mekhong River from where he was born. The Pa-sah forest near Mong Phong Village was thick and he liked the seclusion it offered. His presence in the forest has led the villagers in helping him to build a forest monastery, and from that time he came to be known as Sao (Chao) Mong Phong or Venerable Mong Phong (Maing Phone in Burmese pronunciation). Out of devotion, some people would call him Sao Ton Boon (The Venerable Meritorious) or Sao Paw Sildham (the Venerable Father of Higher Morality). His last rains-retreat as a novice was observed in the Himalaya Mountains after a pilgrimage to Buddhagaya in India and Sri Lanka.

In BE 2529, with the sponsorship of Mr. Sai Noom and Mrs. Nang Sam Seng family and Mr. Nan Shwe and Mrs. Nang Swei’s family from Mong Phong Village, Tachilek, he received higher ordination, upasampada, at the seven hundred years old Wat Suan-dok (Flowers Garden) Monastery in Chiang Mai. To symbolize the teaching of the Buddha on the 38 kinds of blessings, 38 monks were invited to participate in the ordination ceremony. Since his higher ordination and out of respect for his meditation practices, he came to be known as Kruba Boonchum. Kruba (Kruba in Thai pronunciation as in Phra Kruba Srivichai) means teacher and is synonymous with Phra Ajahn in Thai and Sayadaw in Burmese. His ordained name in Pali is Nyanasamvaro, “who guards his mind with wisdom”. In Burmese, he is known as Mong Phong Sayadaw.

After his ordination, Kruba Boonchum has always observed his three months rains-retreat (vassana) in a cave in solitude; he has done so in different caves in Northern Thailand, Northern Shan State of the Union of Burma and Bhutan where he is known as Lama Kruba. In addition, he would also go into the cave from time to time for rest and meditation.

Over the years he has become a speaker of the Buddha’s Dhamma and can explain the Dhamma in all Tai family languages that include Thai, Lanna, Laotian, Shan, Dai and Tai Lue. Without any formal study, he is also a fast learner just through hearing, how to speak Bhutanese and some Chinese. He has since given hundreds of Dhamma talks when he is not in a cave; he usually moves around constantly from village to village never settling in one place for long and his Pali chanting has also spread far and wide. Occasionally he also does a Tibetan chanting.

Since April BE 2553, Kruba Boonchum has been in a solitary retreat in the Rajagrha cave in Lampang Province, Northern Thailand. Heis determined to complete a three-years three-months three-weeks and three-days retreat. He is a vegetarian, as he would eat fruits and biscuits that the devotees bring all the way and place them at the entrance of the cave. He would come out and then take the food when there is no one around. He observes total silence while in retreat but answers dhamma questions in writing when one is put to him.